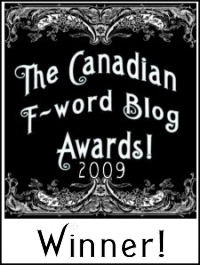 Sincere thanks to everyone who voted for yours truly in the Support Bro category. Is truly an honour. Also, heartfelt congrats to Antonia, Liss & Co. @ Shakesville, Beijing York,  Renee @ Womanist Musings, Anti-Choice is Anti-Awesome and the rest of the winners and nominees for representin’ the f-word in ’09.

You need to stop talking about sexism, violence against women, and rape, because you, Kyle, are a sexual predator. You need to stop linking to any sort of feminist or rape survivor blog, because you are part of the very reason such things are even needed. You should still be in jail, and the fact that you gloss over all this and still write as if you are a good little feminist man with credibility and actual concern is a fucking affront not even I can leave unchallenged. I may not be a big fan of radical anti porn feminism, but you are a fucking slap in the face to everything they stand for and you do not deserve to be in such company or even associated in the most tangent of ways with those women. And I promise you this…anyone who ever Googles your name- well, I will make it my personal mission to see that they know what you have done and what you really are. The first amendment allows me to do exactly that. All the self aggrandizing bullshit in the world will never change your actions: actions that you and you alone are responsible for, and the fact that you pretend like none of it ever happened, show no real remorse or responsibility, and go on with your life and writing like you give a crap about women, rape and feminism is nauseating. Do you get it, Kyle? You are a sex offender, you have no place in rape crisis situations, feminism, or around women at all.

Also, what he said:

Echoing Maddow above, Sarah J  (h/t for the vid) shamelessly drops the ‘p’ word (no, not that one–pervs) in what is (hopefully) the kickoff post to a timely series examining populist renewal and class consciousness in a time of economic crisis and political revitalization in the US:

In one of my courses last year, we read [Tom] Wolfe the same week as we read Hunter S. Thompson. Thompson was the kind of populist that we should be looking at now, moving forward. The consummate outsider, constantly angry at the powerful, constantly on the side of the little guy.

When I get angry at NPR’s Science Friday for being completely clueless about the purpose of an auto industry bailout, it’s that spirit that I’m invoking.

It’s not condescendingly taking a whiskey shot or implying that your audience is racist. It’s much more than that. Obama managed to ride populist support into the White House without ever attempting to change who he was. Because he gets it. He knows what it’s like to be broke, to have to decide between paying your heat and buying food. And yeah, it’s been a long time and two Ivy League schools since he’s had to make those choices, but I don’t think he’s forgotten.

As they say, read the whole damn thing.

I rather adore the willy. In fact, when these long, drawn-out discussions about sex happen on radical feminist sites, I sometimes find the urge to hop in, scream “I LIKE DICK!” and run away, giggling like a third-grader. The fact that I haven’t done so is a testament to my general self-restraint and, uh, amazing level of maturity. Or something.

– Natalia Antonova, who, btw, is made of pure, undiluted WIN (and infinite maturity.  Or something.)

It wouldn’t be year end review time without Jon Swift’s annual survey of 2008’s best blog posts, culled from his huge-ass blogroll and chosen by the bloggers themselves (including yours truly). I can’t think of a better way to spend the first day of 2009 than working your way through the many truly excellent selections highlighted by Swift.  Many thanks to Jon for once again taking the time to do this, especially considering the inevitable crunch posed by the always-busy holiday season.

On an entirely separate note, my sincere condolences to Bill Wolfrum of Shakesville and Shakesquill following the recent passing of his mother. Bill has extensively and eloquently chronicled her journey with cancer, posts that provide a moving testament  to her indomitable spirit and the love they shared.  So, in hindsight, perhaps there are two essential reading assignments to kick off the new year.

Finally, a picture of my cat snoozing, just because:

Via The Tennessee Transgender Political Coalition:

Another Transgender Woman Shot in Memphis

On Christmas Eve, a Memphis television station reported the shooting of Leeneshia Edwards in Memphis. She becomes the third transgender woman shot in Memphis in just six months. At last report, Leeneshia is in critical condition. We extend our hopes and prayers to Leenashia for a speedy recovery.

We also ask for anyone with any information about this latest crime to call Memphis Crimes Stoppers at (901)528-CASH.

The shooting of Leeneshia Edwards helps shed light on a disturbing trend in Memphis. Transgender women who work in the sex industry in order to survive are now being targeted by a pervasive culture of violence.

The indifferent attitude of law enforcement towards the February 16, 2006, murder of Tiffany Berry, and the February 12, 2008, beating of Duanna Johnson by Memphis Police Department officers, has sent a message that the lives of transgender people are not important. This has fed the culture of violence that has permeated the second half of 2008, and is exemplified by the July 1 murder of Ebony Whitaker, the July 28 murder of Dre-Ona Blake, a two year old girl who was killed by the man who had previously been charged with the murder of Tiffany Berry, but was allowed to walk free for two and a half years, the November 9 murder of Duanna Johnson, and now the shooting of Leeneshia Edwards.

This open season on transgender people in Memphis and elsewhere, regardless of whether or not they engage in sex work, must come to an end right now.

We call on business people who refuse to hire transgender people to open their doors immediately to transgender workers so there are alternatives to working on the streets.

We call on religious leaders who preach intolerance towards crossdressers and transsexuals from the pulpit to cease immediately and begin preaching messages of love and acceptance of diversity.

We call on political leaders of all parties to stop campaigning against transgender people and start supporting fully inclusive employment non-discrimination and hate crimes legislation to show that the lives of transgender people have value.

The Tennessee Transgender Political Coalition (TTPC) is an organization designed to educate and advocate on behalf of transgender related legislation at the Federal, State and local levels. TTPC is dedicated to raising public awareness and building alliances with other organizations concerned with equal rights legislation.

For more information, or to make a donation, contact:

Related: More on Leeneshia Edwards from Em and Monica Roberts

What bothers me most about this is the way in which these acts of violence and murders are ignored. When I wrote about this issue I focused on the race aspect. Trans women of color are being targeted. At remembering our dead over 65% of the women listed are of color. I want to know where the hell the NAACP is. I want to know where the hell NOW is. When are we going to decide that these women matter?