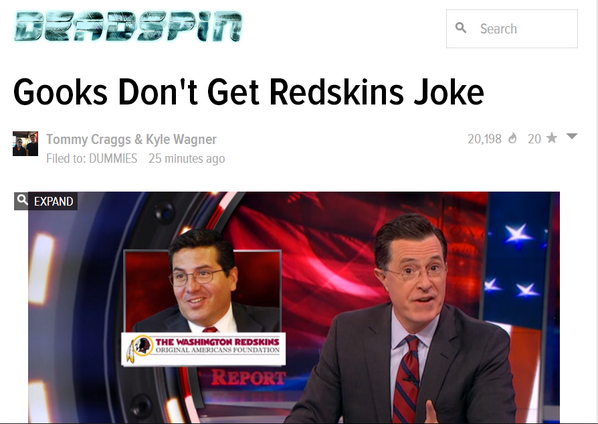 What’s important to understand here is that Park’s aim wasn’t necessarily to get The Colbert Show kicked off the air. Instead, it was to, as point out that satire isn’t always the best activism. “Well-intentioned racial humor doesn’t actually do anything to end racism or the Redskins mascot,” Park told the Jay Caspian Kang at the New Yorker. “That sort of racial humor just makes people who hide under the title of progressivism more comfortable.”

While I think Suey Park is entirely in the right (even if I share some of the middle ground staked out by Melissa Fong), part of me wishes that she had chosen a less alliterative and more immediately representative hash to define her campaign. “Cancel” erroneously projects a censorious sentiment that doesn’t reflect the actual end being sought. None of this excuses the subsequent rank, reflexive racism and misogyny in response to Park’s efforts (as if anyone could have cancelled Colbert over this, even if they wanted to). Nor do I believe that a less inflammatory hash would have made much difference when it comes to vicious, dickhead Colbert Nation fanbois and their vicious, dickhead fanboi-ism (oh, and Deadspin/Gawker can go piss up a flaming rope). But I do think that it was ill-chosen, counterproductive rhetoric.

Of course, since, as noted, Park (and pretty much any WOC who dares to do a digital end-around structural impediments to social justice — perhaps this will help) is damned if she does or doesn’t mind her P’s and Q’s, what’s the point in nominal allies (eg, yr’s truly ^^) honing in on such messenger-killing minutia anyway?

I am left…with Park’s own statement that “There’s no reason for me to act reasonable because I won’t be taken seriously anyway.” For one thing, this is obviously true. When we are told that Suey Park “does not make any claim to objectivity or fairness,” we are seeing a sharp limit to how much a journalist in a fact-checked journalism publication can fully see from her perspective, or allow himself to, without bringing his own narrative frame into peril. Sympathizing with an activist makes it hard to make claims to objectivity or fairness; it makes people wonder if you might be an activist too, and therefore untrustworthy. Quick, better make her unsympathetic!

An activist is, in the end, a living medium; thanks to overwhelming dudebro aversion to empathy, the ultimate message of #CancelColbert has been completely distorted, not amplified, by the superficial meta of indifference (and in many instances outright hostility) couched in dehumanizing demands for impossible perfection.