thank god i work in an industry where i do not have to make embarrassing apologies and quit my job for being a slut.

“There’s just too much brain-dead partisanship, tactical maneuvering for short-term political advantage rather than focusing on the greater good, and also just strident ideology,” the Democratic senator said on “Good Morning America” today.

“The extremes of both parties have to be willing to accept compromises from time to time to make some progress because some progress for the American people is better than nothing, and all too often recently, we’ve been getting nothing,” he said.

“The people who are just rigidly ideological, unwilling to accept practical solutions somewhere in the middle, vote them out, and then change the rules so that the sensible people who remain can actually get the job done,” Bayh said.

In response to Bayh’s demonstrative bleating, the Village is once again pointing fingers at Angry Intertoob Partisans (oh noes!) for his sudden departure from public service :

During the long, still incomplete march to pass a health reform bill, Democratic moderates – in particular Montana’s Baucus and Nebraska’s Nelson — routinely took incoming from liberal bloggers for dragging the bill rightward. The left was especially critical of Bayh’s take last month on Republican Scott Brown’s victory in Massachusetts. Bayh told ABC News that voters up there “just don’t believe the answers we are currently proposing are solving their problems.” He said Democrats would court catastrophe if they ignored the wakeup call. John Amato wrote at CrooksandLiars.com that Bayh was promoting Fox News talking points.

Amato addresses accusations of cruel malfeasance — and the matter of Bayh’s saddle-sore bottom:

Voting almost 48 % of the time against a newly elected Democratic president is beyond being a conservative democrat. it’s aiding and abetting the enemy of change. Bayh whined like a teenager whose parents cut off their Internet yesterday when he gave his presser and said he was so tired of the partisanship. He could have done his part and helped President Obama and the Senate put together a good health care bill, but he did not. Politics is a contact sport and he proved he couldn’t take it.

My ass. Bayh instead proved to be gutless and weak in the wake of constant, deliberate GOP obstruction — indeed, he aided and abetted them nearly half the time in their — wait for it — brain-dead partisan efforts to sink the good ship Obama by any means necessary. Call me “ideologically rigid” (please), but, based on his record, it seems quite apparent that Bayh fell under the all-too-expansive category of “with Dems like these…”.

Update: When even the sensibly centrist, DFH-hatin’ wusses at TNR are calling you a wuss, then, brother, you are a wuss.

Pull up your big boy pants and STFU. 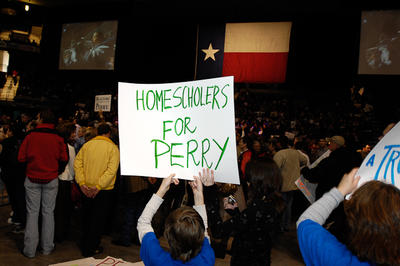 Education reformers were out in full force at this past Sunday’s Perry-Palin rally in Texas (I truly heart Moran Country).

(Also, TEH NUGE!!!1one Ain’t no party like a Tea Party partaaaay.)

Much like wealth redistribution, she was for it before she was against it.

(Read Katrina vanden Heuvel on ‘Palinland’, and then try your goddamndest to not give Palin’s latest scorchingly stupid [yet unfortunately all-too-effective] PR offensive any more oxygen, lest it consume the entire Beltway and blogosphere. And yes, I realize I’m part of the problem, not the solution.)