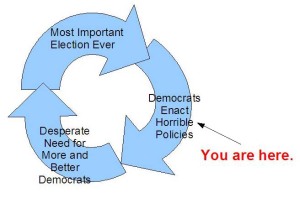 It really is the circle of life in Washington. And, yes, Obama totally deserves the WOTD moniker for rolling over right along with the rest of ’em.  “[A] colossal failure of leadership” is putting it mildly; with this so-called “compromise”, Obama and the Democratic Party have collectively given the legislative finger to the rule of law, securing themselves a dubious legacy: