If only the GENERAL mainstream media establishment would go after each other with this kind of righteous gusto when warranted — as is DEFINITELY the case here:

“We really don’t want our coverage of the civil lawsuit filed against Steelers quarterback Ben Roethlisberger to become an exercise in the bashing of ESPN.  We’ve got some friends who work there (maybe not as many after today), and we don’t generally believe that the network is evil or corrupt or otherwise nasty.

“The handling of the Roethlisberger case makes us wonder whether there’s a complete firewall between the business functions of ESPN and its journalistic activities.  We say this because we’re convinced that the Roethlisberger story initially was ignored due to concerns that ESPN would be jeopardizing its access to the two-time Super Bowl-winning quarterback, who also happens to play for the team with the most loyal and rabid fan base in America.“

The entire post is a must-read, take-no-prisoners smackdown that shows ESPN to indeed “be riding both barebacked and bareassed” (first uncovered by NBC Sports here). And it would seem that the spanking has made an impact, as ProFootballTalk reports in an update:

Technically, ESPN is now acknowledging the report, albeit unwittingly.  As of this posting, the “Top Stories From ABC News” box on ESPN.com’s various pages includes the headline, “Woman:  Super Bowl QB Raped Me.” 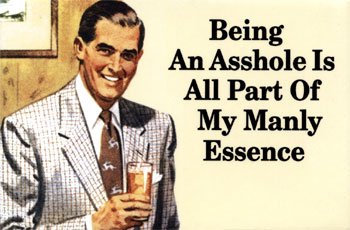 “I am really glad to be back in Calgary, I love Canada,” Avery said after requesting the media to gather around him for a statement after the morning skate. “I just want to comment on how it’s become like a common thing in the NHL for guys to fall in love with my sloppy seconds. I don’t know what that’s about. Enjoy the game tonight.”

The “sloppy seconds” Avery was apparently referring to is ex-girlfriend (and 24 star) Elisha Cuthbert, who is now dating Calgary Flames defenseman Dion Phaneuf.

Also, good on the Stars organization for supporting the suspension:

“Had the league not have suspended him, the Dallas Stars would have,” team owner Tom Hicks said in a statement. “This organization will not tolerate such behavior, especially from a member of our hockey team. We hold our team to a higher standard and will continue to do so.”

Apparently there’s a new Avery Rule in the NHL: don’t “wave your lumber” at the expense of women–and check your bitter misogyny at the arena door.

William K. Wolfrum provides further evidence of why those in the almost uniformly lily-white world of professional golf should avoid touching upon (or, more specifically, deliberately minimizing) the knotty subject of race. Geez, forget Kelly Tilghman — you’d hope that a decade on they’d have learned from Fuzzy Zoeller’s infamous (and totally misconstrued) “fried chicken and collard greens” incident: