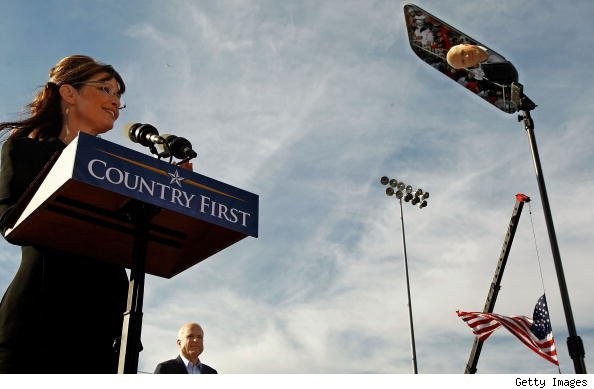 Much like wealth redistribution, she was for it before she was against it.

(Read Katrina vanden Heuvel on ‘Palinland’, and then try your goddamndest to not give Palin’s latest scorchingly stupid [yet unfortunately all-too-effective] PR offensive any more oxygen, lest it consume the entire Beltway and blogosphere. And yes, I realize I’m part of the problem, not the solution.) 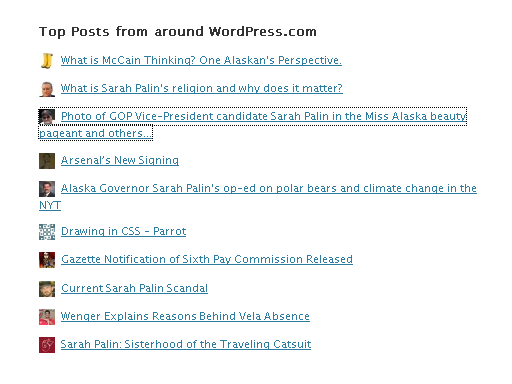 I’m sure this really was simply the result of an error, but still:

Last week marked a watershed moment for two stars of the business world. By chance, an abrupt end seemed imminent for the careers of Time Warner CEO Richard Parsons and Merrill Lynch CEO Stanley O’Neal. Both had reached pinnacles rarely scaled in corporate America by African-Americans. And their fates dominated business headlines worldwide last Friday, Oct. 26. Online at Google News, however, the coverage was, in a word, shocking.

A keyword search for “Richard Parsons” generated a flood of stories about the executive, accompanied by a photo of two rhesus monkeys. Clicking on the image linked users to a story on neither monkeys nor Parsons. Instead, a speculative account on O’Neal’s waning support among Merrill directors appeared on screen. Other than the lynch mob’s noose and the Klansman’s hood, few images of racism are as offensive to African-American as monkeys. Yet the bizarre juxtaposition of image and stories persisted through the week. And even after Google was specifically contacted this week, it continued.

An unstoppable racist hacker? Hardly, according to a Google spokesman. It was an inside job. The perpetrator, however, wasn’t human. The search giant blames its computers and algorithms. Despite its cutting-edge advancements, Google is simply incapable of a performing a skill typically mastered by first graders: matching the right words with the right images. The problem generally has plagued Google since June when it introduced the “Image Version” of Google News to pair the top headlines with illustrative photos.

Unfortunately, Google’s tight lipped ‘Do No Harm (To Our Image)’ policy isn’t helpful in this instance:

Google acknowledges the situation, but declined to openly discuss details of the primate episode. Surprisingly, it was even unwilling to go on record and explicitly disavow any racist motivation. “While we don’t comment on individual stories on Google News,” spokesman Gabriel Stricker told NEWSWEEK, “crawling thousands of sites across the globe is a complicated task, and we’re confident that the quality of the crawled pages is extremely good for the vast majority of news sources on our site.”

Despite Google’s technical explanation, there’s a twist to the Parsons-primate episode that could lead online users to suspect hacker involvement. Over the weekend, the company appeared to have corrected the mismatch, at least temporarily. At times, the primates photo was substituted with a photo of a formally attired Parsons posing with an actor in a Bugs Bunny costume. (The character is owned by Time Warner, which declined to comment for this story.) Later, however, the rhesus photo reappeared, supplanting Parsons and Bugs Bunny. Google denies it was hacked and insists the incident was again, simply a result of its computer systems.

Again, I don’t believe there’s anything more to this other than a series of unfortunate fibre-optic events. But it would be nice if Google’s PR army would just admit they fucked up, instead of standard CYA obfuscating. Regardless, I’d wager Dog The Bounty Hunter wishes he could blame his recent career-torpedoing racial faux pas on a mere computer glitch.

Related: This is gonna hurt, but, via Racialicious (*deep breath*), Perez Hilton (*winces*) has posted audio of the now-infamous Chapman family phone conversation. Hilton also notes that Chapman, qua Mel Gibson and Michael Richards, “has reached out to the Rev. Al Sharpton” in an attempt to salvage what’s left of his rapidly dwindling reputation continue the healing process. Uh huh.

I am so sick of these stories of white males caught on tape saying racist shit, and then running to Al Sharpton for forgiveness. Seriously I am so over this shit.

Which is to say, not in the fucking least.

I second Alison: please, for the love of God, enough with the slavering, credulous media greenwashing re: nuclear power. Because the prospect of this and this demands serious scrutiny, not lazy stenography.

(h/t Gristmill for some of the links re: greenwashing and nuclear shilling)