The Beastie Boys turned curiosity into a form of art. They wanted to know more about what was around them and learn everything they could about what wasn’t. Forget about Kurt Cobain for a second: For kids like me, the Beastie Boys invented the 90s. Technology was changing fast and the world was shrinking rapidly. Between their music and label/magazine Grand Royal, the Beasties showed how to reach out and scoop up all the best parts. New York hip-hop and punk rock, Japanese pop, Jamaican dub– all of it could be gathered and re-assembled into something that reflected who you were. This sort of cultural mixing was nothing new, but the Beastie Boys brought it to the mainstream. They were ambassadors, but their hipness didn’t look down on anybody. It felt inclusive.

Related: Forrest Wickman on Adam Yauch’s legacy as successful NYC indie film mogul; Jen Doll on how, for her generational cohort, the Beasties provided “a form of musical New York PR—at least, a “PR” based in coolness, a new style of music, a new form of flouting the rules, a new kind of joy and energy.”

Update: Sarah Seltzer notes how Yauch and the Beasties addressed, renounced, and tried to make amends for their infamously regressive past:

When I think about the Beasties, I think first about the rebellious, obnoxious kids who first became famous. Then I inevitably remember their ability to move forward way past that phase, with rhymes like this one from MCA in the song “Sure Shot”: “I want to say a little something that’s long overdue/ The disrespect to women has got to be through/ To all the mothers and sisters and wives and friends/ I want to offer my love and respect to the end.

They also changed their offensive lyrics in concert and began to chastise regressive content in music — even their own.

As Ana Carey wrote last year, the Beasties prove that “being a sexist idiot in your youth … doesn’t mean that you can’t grow up and learn something.”

Via Frank Frink @ A Creative Revolution: 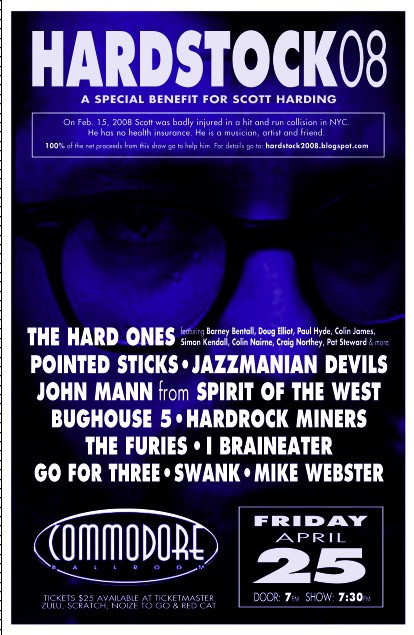 On Feb 15 2008, Scott Harding was badly injured in a hit and run collision in NYC. He has no health insurance. He is a musician, artist and friend. 100% of the net proceeds from this show go to help him. For details…..well you are here.

The show features the cream of Vancouver musicians from the last 30 years.
This benefit show will take place April 25 at the Commodore Ballroom in Vancouver, BC. Headlining is a super group we have created for the occasion called The Hard Ones, featuring (in alphabetical order) Barney Bentall, Doug Elliot, Paul Hyde, Colin James, Simon Kendall, Colin Nairne, Craig Northey, Pat Steward…and others; The Pointed Sticks; The Jazzmanian Devils; John Mann from Spirit of the West with his son; Bughouse 5; Hardrock Miners; the Furies; I Braineater; Go for 3, and the Mike Webster band.
Doors open at 7:00 and Music starts at 7:30 sharp.

Did we say that 100% of the net proceeds go to Scotty Hard? Why? Because he needs it, and we love him and he deserves it. Our number one goal is to raise money for him in this time of need.

Another goal is to honour the universal health care program we have in Canada, which helps to make us a civilized country. While Scott is a citizen of Canada, he has been living in the US for some time with a green card. As a musician, engineer, recording producer and artist, he is like so many other Americans who do not have health insurance. Barack Obama says there are 47 million of them. Which is a number that means nothing until you know someone personally who needs help, and can’t afford to pay for it. This is why we have come together to help.

Another reason is the real sense of community and love and friendship that binds musicians in Vancouver. We call it Hardstock to honour the spirit of the individuals who came forward, and made changes to their busy schedules, and offered without ego and without thought of renumeration or thought of loss of possible renumeration, to come together and put on a show for one of our own.

Tickets will be available through Ticketmaster, and will available Wednesday April 9. With 10 bands and many more guest musicians, this show will sell out very quickly. We have tried to keep the ticket price affordable for all, and recommend that you purchase what you need for yourself and friends as soon as they go on sale.

In the coming days, I will profile the various musicians that will play, and the man himself Scotty Hard aka Scott Harding.

There you will see many pictures and words of love from myself and the many friends of Scott.
Love
Dennis Mills, promoter of Hardstock 08
aka Dense Milt

Update: Much more from Frank here.

The Bush administration’s Abstinence Only Program is an example of a failed national health-care policy directive, based on ideology rather than on sound scientific-based evidence that must be the cornerstone of good public health-care policy.

I believe this is what is commonly known as a “moment of clarity”. Of course, the usual suspects are demonstratively calling for a waahmbulance. Hey, I’ve got the first 25 pennies covered if someone else wants to pony up the other half.

Side note: am I the only one who regularly mistakes Leslee Unrah for Leslie Uggams?