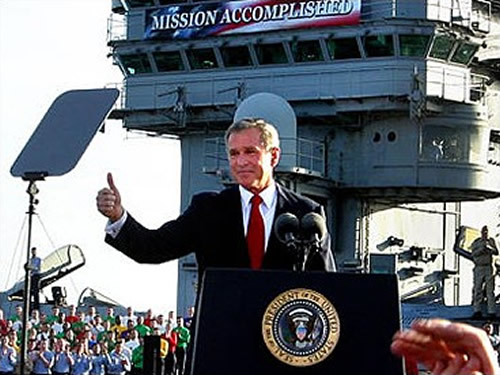 President George W. Bush will signal next week that he will pull no more troops out of Iraq while he is president, once his troop surge ends in the summer.

His senior Iraq commander General David Petraeus will use his testimony to congress on Tuesday and Wednesday to argue for continuing political support for the tactics of the surge strategy even after a planned drawdown of troops.

US military chiefs have already committed to reduce the American combat presence in Iraq from 20 to 15 brigades by September. But in what administration officials say is a bid to bind the hands of his successor, Mr Bush will make clear that he will go no further to placate his critics.

“It looks like it will be that far and no further,” said a Pentagon official.

“Any further reductions will have to be made by the next president.”

With all three presidential candidates sitting on committees that will hear from Petraeus, how much you wanna bet that the Kabuki performances are especially melodramatic this time ’round? Yep, nothing like a good old fashioned dog and pony show to liven up a lull in the primary horse race. Speaking of award-worthy performances, it appears that General Colin Powell David Petraeus (and his 4 star credibility) will once again be playing the role of proxy for some decidedly less less-than-honest brokers:

Mr Bush’s determination to stand firm was reinforced by a report from Frederick Kagan, the architect of the surge strategy, sent to officials a week ago, which states: “The surge and the change in strategy have transformed security in Iraq”.

Mr Kagan warns that a reduction in combat forces below 15 battalions could endanger American objectives.

He said: “The drawdown that is already planned accepts considerable risk and will make the task of moving forward more complicated and harder and little bit slower. “I wouldn’t be comfortable pulling a single soldier out because we pay an exponential price for every brigade that comes out.”

And what are these vital “objectives” that would be “endangered” by troop reductions?

Michael O’Hanlon, a Brookings expert who supports Hillary Clinton, said Mr Bush has his eye on the judgment of history. “There’s obviously a focus that comes from being in the last year of a presidency,” he said.

“It’s inconceivable he could be a successful president if his central foreign policy project failed, especially because it was his choice to wage the war when he did and it was his administration’s mistakes that set us on such a bad path.

“If we get to some reasonable outcome in Iraq, that’s not going to make him a great president but if we fail, it’s very likely he will be seen as a poor president.”

(Oh, and not to toot my own horn, but I called all this last July. Sometimes I really, really hate being right.)

Related: Tom Engelhardt on why Petraeus’ testimony is guaranteed to be “delusional”; advance testimony from OG Iraq war critics William Odom and Nir Rosen (more on Rosen from Jon Schwarz).