Via Jay Rosen (by way of Sarah), I see that the Villagers are still primarily concerned with the circumference of their navels (which also corresponds with the breadth and depth of their shallow egos):

The standard form during “joint press availabilities” — bureaucratic lingo for press conferences where leaders from two different countries stand next to each other and take questions from reporters — is that each official’s press corps gets the same number of questions.

Well, during the joint press availability on Wednesday with Mr. Obama and British Prime Minister Gordon Brown at the ornate British foreign office near 10 Downing Street, Mr. Brown called on the U.K. press corps for four whole questions. Meanwhile, Mr. Obama only called on the White House press corps, which schlepped (granted, on a really nice United 777 charter) across the Atlantic to scrupulously chronicle his first overseas trip as president, thrice.

Mr. Obama even tried to cut off the press conference after six questions had been asked—most dealing with the growing rift between the United States and the rest of the world over how to fix the global economy. “All right?” he asked, in an “O.K.-we’re-done-I’m-outta-here” way.

Because of this unforgivable slight, Helene Cooper wonders if Obama is trying to ‘muzzle’ the White House press corps (and pines for the good ol’ days of Condie Rice–OMG SHOEZ!) Seriously, what the hell happened to Cooper? When did she morph into the quintessential whiny-ass titty baby?

Apparently the brats in the beltway need fresh binkies to suck on.

You know, it says a lot that, during a time of global economic upheaval and uncertainty, a member of the White House press corps earnestly believes that not getting asked an extra question by the POTUS at an international presser is a matter of grave import.  One would hope that Cooper would take some heat from her colleagues for her demonstrative outburst. Alas, they were likely cheering her on from the sidelines, shouting ‘YEAH! TRUTH TO POWER!’

Because, sadly, the Villagers live in an isolated upper-middle class bubble, sequestered away from the rest of the nation (and its petty problems) in an insular gated community filled with an endless parade of cocktail parties and trivial sniping.  To the average Washington correspondent, meeting with the Great Unwashed is presented as an exercise in cultural anthropology, eg, John King’s Sunday morning diner round-tables with Real Americans (if you cut them, they BLEED! I know, crazy!) At this point, it’s all too clear that they are essentially writing for each other; the conversation is entirely circular, even if the 4th estate have deluded themselves into believing that the general public actually gives a rat’s ass about Ed Henry’s game day ritual.

Yeah, politics is all just a fucking game to them. Winners and losers, gaffes and ‘body blows’–political journalism as play-by-play sportscasting. Which is why, in this context, it is perfectly natural for Helene Cooper to be (passive-aggressively) “keeping score.”

The greatest irony of the Thatcher crusade is that its economics pulled against its ethics. I doubt if the idealised abstinent, puritanical, self-respecting Grantham of her imagination ever existed in the real world. It certainly didn’t exist in her Britain. As a quick reading of the Communist Manifesto would have warned her, free-market capitalism is, of its very essence, subversive. It is restless, heaving, masterless, wonderfully dynamic and creative, but, in itself, utterly amoral. The hot breath of the cash nexus dissolves the ties of faith, community, family and tradition. And, as Friedrich von Hayek pointed out more vigorously than any critic of the free market, entrepreneurial success has nothing to do with merit or fairness. It is about satisfying wants and even at times about creating or manufacturing them; and the wants are as likely to be bad as good. The speculative frenzies and spectacular frauds that have studded its history are of its essence, too: among the forces that drive it, greed, credulity and the herd instinct loom much larger than the rationality that most economists celebrate. 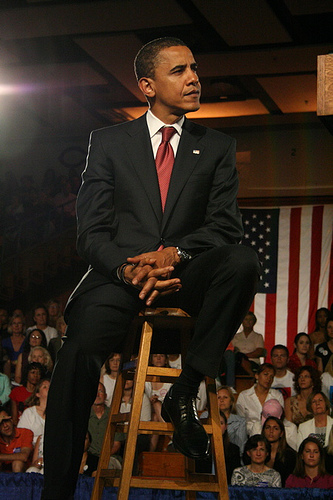 For fuck’s sake, Dana–stop wasting our time (and Katherine Graham’s money), cut the crap and just say what you really fucking mean (and, um, next time, try to get your facts straight, asshole).

There’s no reason to include Britney Spears and Paris Hilton in this ad. None. It hangs on the word “celebrity” being included, which means it could have just as well been Brad Pitt and George Clooney. Anyway, all the footage is from Obama’s Berlin speech, not the red carpet. This is absolutely meant to juxtapose images of white women with images of a black man.

First he takes teh White House, then he’ll take teh white wimmins…