I’m sure by now you’re all overwhelmed with nostalgia for the 2008 presidential campaign (you betcha!) I mean, it’s been, what, just over a month since the election, right?  So, to help satisfy your endless electioneering jones, check out this clip of Colin Powell, in an interview with Fareed Zakaria that will air on CNN this Sunday, goin’ all South Bronx on Gov. Palin and the GOPizzle:

Gov. Palin, to some extent, pushed the party more to the right, and I think she had something of a polarizing effect when she talked about how small town values are good. Well, most of us don’t live in small towns. And I was raised in the South Bronx, and there’s nothing wrong with my value system from the South Bronx.

Apparently small town value systems apparently don’t take into account demographics and simple mathematics. (Hint: there are a lot of eligible voters–many of them *eek* not white–in the Bronx.  And in Arlington. To say nothing of Los Angeles, Boston, Chicago, Miami, Philadelphia, Indianapolis, Cleveland…)

Who needs complicated statistics and a viable long-term political strategy when you have fresh moose-burgers and a collective annual oil stipend (which, btw, is so not socialism) to cling to, along with guns, religion and marginalizing resentment? 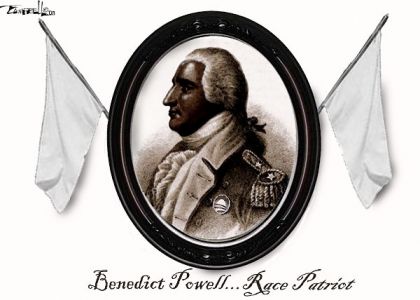 I’ve never heard of this Gordon Campbell asshat before today, and, judging by his totally satirical depiction of Colin Powell as Benedict Arnold in blackface, that is something to be thankful for.

“No sane person would question his patriotism toward the United States or even the Constitution and the principles of democracy… .  But his support of such things as affirmative action and Roe v. Wade placed him too left of center for the bulk of the GOP electorate… .

“”The only reasonable explanation for such a public political “about-face” in the midst of this important election is that Colin Powell, perhaps understandably, wishes to see someone who looks like himself in the White House… .

“It’s my opinion that General Powell has based his endorsement of Barack Obama on the color of his skin, not his qualifications, his experience or the content of his character.”

Just so we’re clear, Campbell freely admits that Powell’s “support of such things as affirmative action and Roe v. Wade placed him too left of center for the bulk of the GOP electorate”.  Indeed,  John McCain has stated that he supports neither affirmative action nor Roe v. Wade, and his running mate, in addition to supporting the overturning of Roe, opposes abortion even in cases of rape and incest.  Yet, for some reason, rather than putting two and two together (ie, Powell, much like McCain-supporting dissident Democrat-turned-Independent Joe Lieberman, chose to endorse the candidate who he believes best represents his ideals, regardless of partisan affiliation), this observation instead inexplicably leads Campbell to conclude that “[t]he only [emphasis mine] reasonable explanation for such a public about-face…is that Powell…wishes to see someone who looks like himself [ie, a fellow neeegro] in the White House”.

Which, in turn, forces yours truly to surmise that the only reasonable explanation for Campbell’s painfully contorted reasoning (to say nothing of the FRICKIN’ BLACKFACE CARTOON–SWEET BABY JESUS!) is that he’s a cross-burning, sheet-wearing bag of racist douche who vigorously masturbates to Mein Kampf every night before bed.  One would have to be insane (or, at the very least, unreasonable) to conclude otherwise.  There is no alternative.

Related: More Powell-inspired Party of Lincoln outreach to teh black community from George Will, Pat Buchanan, and RedState (h/t Think Progress).  Also see Renee, who asks an obvious question: “Why is it that whites who have been voting for white people since the US became a country were not engaging in racial solidarity voting, and a black man endorsing another black man is?”

(h/t Petulant for the vid)

Already some pro-American residents of Outer Wingnuttia have declared that Powell is only voting for Obama because they are both scary neegros. Which, according to airtight wingnut lawjick [sic], makes Powell a big fat RAAACIST!!!!11 jerk. (Wingnut lawjick [sic] also apparently dictates that USING BLOCK CAPS BUTTRESSES YOUR POINT!!!)

Still, in all seriousness, there is admittedly some substance to Realipundit’s carefully-crafted “big fat racist jerk” thesis. Racial solidarity would certainly help explain why well-known GOP soul brotha Chris Buckley, along with a number of other prominent chocolate-coated Obamacons, are also wearing ‘Team Obama’ t-shirts in public–and why Powell famously stumped for Alan Keyes in 2000.

We can’t judge our people and hold our elections on that kind of basis. Yes, that kind of negativity troubled me. And the constant shifting of the argument, I was troubled a couple of weeks ago when in the middle of the crisis the campaign said ‘we’re going to go negative,’ and they announced it. ‘We’re going to go negative and attack his character through Bill Ayers.’ Now I guess the message this week is we’re going to call him a socialist. Mr. Obama is now a socialist, because he dares to suggest that maybe we ought to look at the tax structure that we have. Taxes are always a redistribution of money. Most of the taxes that are redistributed go back to those who pay them, in roads and airports and hospitals and schools. And taxes are necessary for the common good. And there’s nothing wrong with examining what our tax structure is or who should be paying more or who should be paying les, and for us to say that makes you a socialist is an unfortunate characterization that I don’t think is accurate.

“[T]axes are necessary for the common good” = not pro-American. Go back to Northern Virginia where you belong, hippie!

Update: Donovan McNabb fanclub president Rush Limbaugh puts down the pill bottle long enough to once again prove how so not racist he is (or isn’t).

Enough of this bullshit and enough of keeping the eye off the prize. Worrying about the election is shit at the moment; it will happen regardless, and even if a Democrat wins, we’re going to have to worry about restoring credibility in government. This utter bullshit about democracy and freedom in the middle east has got to fucking stop until we address the sheer blasphemy that was done in the name of our supposedly moral country.

Keep screaming it until their damn ears bleed: Bush and his cabinet approved torture.

– Space Cowboy, Scream It from the Highest Mountain: “DO SOMETHING!“

5 years ago today, then-Secretary of State (and token ‘moderate’) Colin Powell chose (whether knowingly or with willful indifference) to blow all his accrued political capital in front of the UN Security council with an audacious performance filled with Power-Pointed propaganda, magical mobile bioweapons labs and fantastic tales of (ephemeral) collusion between Al Qaeda and Saddam Hussein. Take a few moments to recall the good ol’ days of hysterical brinkmanship and craven Democratic capitulation (h/t Rising Hegemon).  Oh, and feel free to also read through the nearly 1000 lies told by President Bush and his top officials (including Saint Colin) in order to help sell the future quagmire to an all-too-credulous media and general public (Pottery Barn rule FTW!)

Related: Jamison Foser on the startling similarities between between Powell and “surge” figurehead General Petraeus, who, along with US Ambassador to Iraq Ryan Crocker, is once again scheduled to wield his formidable credibility with yet another 4 star performance in front of Congress in April. It’s all just a little bit of history repeating–again.