What I want instead is to honor George Tiller, a man who honored women. And I want instead to honor those who value fetal life, but who do not lose sight of the women who give that life, and who would never dream of murdering a doctor who was among the few to give those women the services, respect, and dignity they deserved.

See more people who honour women (and life) at IamDrTiller.com. 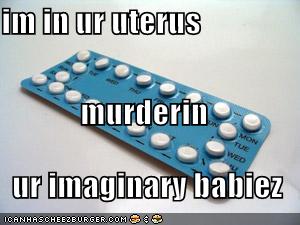 Oh, right — today is “Protest the Pill Day”, aka, ‘Take Your Common Ground and Shove It Day’ (as Kate Harding put it) or, as I call it, ‘Anti-Choice Unmasking Day:’

This is the true face of the anti-choice movement: blatant lies, scare tactics, and hyperbolic accusations of “murder”.

And this is the face that the anti-choice movement often tries to hide behind a mask of mainstream “moderation”. Amanda Marcotte at RH Reality Check recently discovered an anti-choice activist handbook that gives tips on how to debate people on this issue without sounding as crazy as they really are.

For example, check out how they recommend dealing with the issue of birth control:

In the section titled “Why Don’t You Pass Out Condoms and Promote Birth Control?,” the authors tacitly admit that sensible people might be put off by the anti-choice movement’s willingness to increase the abortion rate by standing as firmly against contraception, especially the birth control pill, as they do legal abortion. So instead of allowing members to admit their hostility to all forms of contraception, they instruct them to conceal their beliefs until a target has been softened up to hear about their true message–sexual abstinence for all not trying to procreate–through a series of dodgy, misleading arguments, including misinformation about how the birth control pill works.

This tactic is a mainstay of the anti-choice movement: it shows one face to the initiated, and another to the public, especially on the topic of contraception. Once you realize this, the movement’s half-hearted denunciations of Dr. Tiller’s murder, coupled with the enthusiastic return to calling Dr. Tiller a monster, become all the more chilling.

Chilling indeed. Because the true face of this movement not only considers Dr. George Tiller a genocidal murderer… they consider the millions of women around the country who take birth control as murderers, too.

Y’know, if these zygotist yahoos were really concerned about mass genocide on a microscopic level, they’d have picketers marching outside the bedrooms of every Kleenex-hoarding teenage boy in North America. Seriously. We’re talking SUBURBAN DEATH MILLS here, people.

Anyway, In honour of this year’s annual mobilization of dipshittery by the malicious anti-choice analogue to moon-landing hoaxers, we at bastard.logic encourage all our fellow pro-choice peeps to make a donation, whether monetary or otherwise, to your local Planned Parenthood office.  Make sure to tell ’em you are doing so on behalf of the fine folks at the American Life League–and because you obviously hate teh innocent widdle babies. Duh.