The other day, Howard Weaver sent out the following precient (if pithy) observation via tweet:

Politico sure seems to be ground zero for inside-the-beltway conventional wisdom.

Mhm, someone got a fresh new pair of cute Captain Obvious underpants for Christmas.

Regardless, I shudder to think what they’re spiking the cocktails with in Georgetown if the following Politico headline represents the “conventional wisdom” on the RNC’s recent racial follies:

Ok, yeah if by “help” one means “further paint the GOP into a demographically narrow corner,” then, sure–go Team Saltsman! 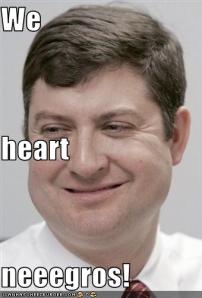 Wholly unable to confirm this, but I’m told the talk is now that Mike Duncan may have to perform in black face at the upcoming RNC meeting to remain a credible candidate for the job.

If one is to believe that the RNC officials quoted by Andy Barr are being sincere (and not simply taking the lead of Saltsman’s former boss by spinning like out of control centrifuges) The Party of Lincoln is now officially The Party of Jolson–which sure is a great way to reintroduce the tarnished GOP brand going into 2009: adopting what amounts to the I-Can’t-Believe-It’s-Not-The-Southern-Strategy! Strategy. Of course, some of these doe-eyed grassroots bigots are likely the same strategic savants who thought George Allen was the *ahem* white knight best prepared to save the party from Bush’s long shadow in 2008. So, I suppose one shouldn’t be too surprised they would also consider this year’s ‘Macaca’ to be much ado about nothing.

Related: Adam Serwer schools various wingnuts  on what David Ehrenstein did and didn’t say in his now-infamous LA Times op-ed that served as inspiration for Shanklin’s “satirical” song.