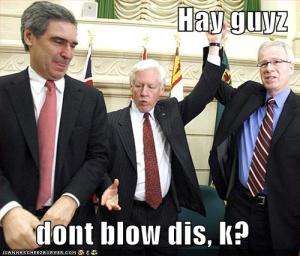 Now that Stephen Harper has pulled a McCain and successfully suspended parliament, a question seems to be on the lips of many both inside and outside the Liberal Party of Canada: is it time for Stephane Dion to step aside? As noted by The Economist, “the parliamentary hiatus might allow the Liberals to bring forward their leadership vote and replace the lacklustre Mr Dion.” Chrystal Ocean believes such a maneuver is imperative if the coalition is to succeed, because “when voters talk about the Liberal Party, in the end – after discussion of Martinites vs. Chretianites, sponsorship, party disorganization, lack of grassroots – it always comes down to Dion. And his leadership”:

The LPC needs, crucially, someone who can recapture the imaginations of the Canadian public, someone who can solidly portray competence. Dion can’t do that. Nor, do I think, can Iggy (who gives most lefties the creeps) or Rae or LeBlanc.

There must be a LPC emergency measure which could i) have the duration of the leadership race shortened, ii) allow all LPC members to vote for the leader (one member, one vote), rather than insisting on running a costly convention at which only people backed by money can attend and vote, iii) or find some other way to put a new leader in place quickly.

Look, even though I’m not exactly enamoured with Dion’s tenure as Liberal leader, at this point I honestly don’t give a toss. Regardless who helms the Liberal Party of Canada, it’s pretty much a given the Harpercons are going to use their deep party warchest to escalate the PR assault on Layton and Duceppe, the socialist/separatist toxic twins of the coalition troika. All parties involved need to maintain focus on the primary objective: replacing Stephen Harper with the Coalition for Change. And if that means sucking it up and (temporarily) giving the keys to 24 Sussex to Stephane Dion, so be it.

Anything else is simply an unnecessary distraction that plays right into the Tories’ brazen divide-and-conquer strategy–which, according to the National Post (grain of salt alert), may already be having an impact within Liberal ranks.

Update: Plz to be stuffing a sweat sock in Jim Karygiannis mouth. Kthnxbai. (Will update once footage of Karygiannis’ tirade is posted.)

Update 2: As promised, Jim Karygiannis, talking fast and loose to Rosemary Thompson of CTV News.  Some of the things he has to say (eg, regarding Stephen harper) are dead on, but most of his comments are unnecessarily inflammatory and should not have been aired out in public.

So, as you probably heard, Uncle Steve managed to stave off the inevitable till mid-January:

Gov. Gen. Michaëlle Jean has granted a request from Stephen Harper to suspend Parliament until late next month, the prime minister announced on Thursday, a move that avoids a confidence vote set for Monday that could have toppled his minority government.

“Following my advice, the Governor General has agreed to prorogue Parliament,” Harper said outside Rideau Hall after a 2½-hour meeting with Jean.

“When Parliament resumes Jan. 26, the first order of business will be the presentation of a federal budget.”

Monday’s no-confidence vote could have precipitated the rise of a proposed Liberal-NDP coalition, supported by the Bloc Québécois or it could have resulted in another election, depending on the Governor General’s response.

But the decision to suspend Parliament — made after Jean cut short a two-week trip to Europe — only gives the Tories a reprieve until Jan. 26, when they plan to table a budget, which would be a confidence vote, as all money bills are.

In the interim, the Tories will continue to wage a public relations blitz against the Liberal-NDP coalition.

Steve pulls the fire alarm and walks into the exam he knows he’s going to fail.
GG says it’s ok and grants him an eight week extension on his separatists and socialists topic.

Man, it’s like election time all over again–only now people actually give a shit about the outcome (too bad we can’t cast a vote on the matter.)

Government House Leader Jay Hill just confirmed during a Newsworld interview that Uncle Steve will ask the Governor General to suspend Parliament to save his ass for the good of the nation.

Gee, what a surprise.

And to think that up until late last week most of the nation likely thought “proroguing” was a special Albertan method of cooking perogies.

Townhall.com is a mainstream, legitimate, comprehensive, informative, and entertaining conservative news and opinion magazine and website. Disclosure: they’ve written nice things about me.

– Serious Political Journalist™ and Paid Blogger™ Marc Ambinder, curbstomping irony and his already suspect credibility, all in one shot.

Thers does the heavy lifting (well, ok, more like like shunting half-filled crates at a feather supplier’s warehouse) so I don’t have to:

I don’t doubt for a minute that Townhall really does represent the finest, most cutting edge conservative thought available anywhere, online or off. That’s why it features Chuck Norris. Not to mention Mike Adams. Or Doug Giles.

Anyone surprised to discover at Townhall Dot Com a completely ludicrous smear against an astoundingly centrist Democratic president is either dangerously naive or an “MSM” journalist, or both. Gonna be a fun four years for those of us who like saying “fuck” online, I’ll tell you that for free.

Fret not, Marc. I’m totally sure Hugh Hewitt isn’t saying nasty things about you (and your barely concealed Liberal Bias™) behind your back. *snicker*