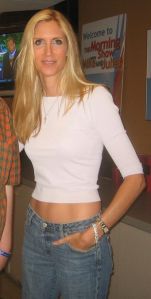 Related: Dave Neiwert highlights Coulter’s new business endeavour, “[s]hilling for Patriot-style right-wing moneymaking scams,” while Steve M. wonders if the report is part of a Machiavellian plot on the part of Coulter to garner sympathy (and, more importantly, as many schadenfreude-laden missives from the left as possible) prior to the release of her new book. Yes, she has a new book set to be released, and, yes, the subject is–wait for it–the evils of ‘liberalism’. Try to hide your shock, true believers.

Detainees [currently held at Guantanamo] who pose a grave national security threat might be unprosecutable for a variety of reasons: because of deficiencies in the criminal law as it stood in 2001, because evidence against them would not stand up in court, because the government might not have enough evidence to convict or because it obtained key evidence under coercive conditions.

“Under coercive conditions”. Excuse me, but what does that mean in English? Try: Because they got intelligence from torturing people. Coercion means force. It means they forced “information” out of them. Not coax, trick, lure, force. That means the victims had no choice. And the only way in which human beings can seriously have no choice at all is by subjecting them to such severe mental and physical pain and suffering that they have no option as human beings but to tell their torturers something.

This is the defining line of torture: not some arbitrary comic book technique, but a psychological and physical fact: pushing another human being to the point where choice becomes unavailable to him or her.

The conclusion is especially on-point:

[P]eople wonder why I seem so angry and concerned about this issue, about its centrality to this election, and about the unique, once-in-a-century chance to put it behind us before it infects us beyond cure. It is, in my judgment, the biggest single crisis we now face, because it does not simply affect our wealth or our safety, but because it affects who we are.

We cannot know hope until we end torture.

John Brennan, President-elect Barack Obama’s top adviser on intelligence, took his name out of the running Tuesday for any intelligence position in the new administration.Brennan wrote in a Nov. 25 letter to Obama that he did not want to be a distraction. His potential appointment as CIA director has raised a firestorm in liberal blogs that associate him with the Bush administration’s interrogation, detention and rendition policies.

In a 2005 interview on “The NewsHour With Jim Lehrer,” Brennan defended rendition as “an absolutely vital tool.” In 2007 on CBS News, he said the CIA’s harsh interrogation program, which included waterboarding on at least three prisoners, produced “life saving” intelligence. Waterboarding is a form of simulated drowning.

Brennan has spoken out publicly against waterboarding.

“The fact that I was not involved in the decisionmaking process for any of these controversial policies and actions has been ignored,” he wrote in a letter obtained by The Associated Press. “Indeed, my criticism of these policies within government circles was the reason why I was twice considered for more senior-level positions in the current administration only to be rebuffed by the White House.”

Glennzilla explains why every decent human being should be breathing a sigh of relief at this development, and why Brennan’s contention that he should have gotten a plate of cookies because he was out of the loop with regards to the sausage-making process of torture “enhanced interrogation” is, in a word, bullshit:

Whether he “was involved in the decision-making process for any of these controversial policies” is not and never was the issue.  Rather, as I documented at length when I first wrote about Brennan, he was an ardent supporter of those policies, including “enhanced interrogation techniques” and rendition, both of which he said he was intimately familiar with as a result of his CIA position.  As virtually everyone who opposed his nomination made clear — Andrew Sullivan, Digby, Cenk Uygur, Big Tent Democrat and others — that is why he was so unacceptable.

You can read Brennan’s withdrawal letter in full here.