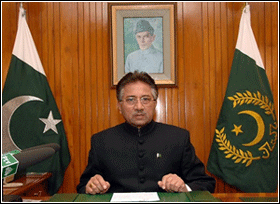 Speaking on television from his presidential office here at 1 p.m., Mr. Musharraf, dressed in a gray suit and tie, said that after consulting with his aides, “I have decided to resign today.” He said he was putting national interest above “personal bravado.”

“Whether I win or lose the impeachment, the nation will lose,” he said, adding that he was not prepared to put the office of the presidency through the impeachment process.

Mr. Musharraf said the governing coalition, which has pushed for impeachment, had tried to “turn lies into truths.”

“They don’t realize they can succeed against me but the country will undergo irreparable damage.”

In an emotional ending to a speech lasting more than an hour, Mr. Musharraf raised his clenched fists to chest height, and said, “Long live Pakistan!”

So what happens next? As Kamran Rehmat notes, the resignation likely signals the end of the uneasy ruling coaltion between Asif Zardari’s PPP and former prime minister Nawaz Sharif’s PML-N:

The dominant view is that the desire to remove the former president was the glue – and part of an understanding – that held them together following a spectacular showing at the February 18 national elections, which saw Musharraf allies drubbed.

For starters, the PPP will be under tremendous pressure to restore the judges Musharraf deposed.

Pakistanis are not likely to quickly forget that the PPP has twice failed to restore them despite public assurances.

The PPP fears the deposed judiciary will revoke the indemnity granted to Asif Zardari, its leader, under a so-called National Reconciliation Ordinance.

However, PML-N chief Nawaz Sharif, who pushed Zardari into making a pitch for Musharraf’s ouster early this month, will unlikely settle for anything less than the reinstatement of judges and a consensus president.

In that, the end of Musharraf’s rule may signal the beginning of real political drama.

Related: Arif Rafiq of Pakistan Policy Blog provides a minute-by-minute breakdown of Musharraf’s rambling resignation speech (h/t Abu Muqawama); BBC News has extensive coverage, including ‘key excerpts’ from the speech, a look back at Musharraf’s ‘mixed legacy’ and the impact his resignation will have on the ‘war on terror’; Pakinstani blogger Teeth Maestro calls for Pakistanis to “hold strong” and  “rebuild Pakistan” and  expresses concerns about the likelihood of a Zardari presidency (“Run for the hills!”)

One thought on “Musharraf Resigns”