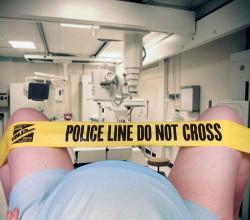 Fern Hill (seconded by JJ) throws down the gauntlet:

You supporters of Bill C-484, ‘An Act to Amend to Amend the Criminal Code (injuring or causing the death of an unborn child while committing an offense)’, insist that the bill has nothing to do with women’s rights (i.e. zip zero nada nuttin’ to do with abortion). You keep carping repeating that it is all about PROTECTING pregnant women.

OK. So. Here’s the challenge. Find one reputatable, established organization working against violence against women that publicly endorses this bill and we’ll shut up.

Thus far, the silence from the ‘pro’ side has been thunderously deafening. I for one am shocked, absolutely SHOCKED, I tell you!! Yep, am utterly flabbergasted that anti-VAW organizations haven’t fallen over each other trying to jump aboard Kenny-boy’s pro-lifewoman bandwagon.

Guess the poor ladies really do need a man (or an honourary man) to tell them what’s best for ’em.

There are lots of people who will swear on a stack of Bibles, as it were, that this bill has nothing to do with abortion. Funny thing though: all of those people are well-known for opposing abortion. All of the highly vocal supporters of this legislation who have previously stated public positions on abortion and choice — at least that I’m aware of — are all in the same group. And it ain’t the group that supports a woman’s reproductive freedom.

The truth about feminism is that we cannot imagine the road to change if it comes back in exclusive dividends. It is meant for the freedom of others who are not here, who have died in vain, in violence, in secrecy, in the dark, and in fear. Feminism, until it thwarts itself from the clutches of materialistic greed, will never liberate anyone. It will succeed in a half-mast victory for a few handfuls of women who’ll erroneously assume the battle was well-fought and won.

– Sudy, LIVE Blogging from WAM: The Truth Out About Feminism (h/t purtek)

When it comes to successful anti-racist activism, Carmen Van Kerckhove of Racialicious reminds us that facts and statistics aren’t enough to instill change; focusing on the human dimension is a more effective method of inspiration:

When I think back on how my own views about race have evolved over my lifetime, I realize that some of the most profound shifts in my thinking resulted not from reading theoretical treatises, but from learning about specific individuals’ experiences.

Before I read Jonathan Kozol’s book Amazing Grace: Lives of Children and the Conscience of a Nation, for example, I was a staunch believer in rugged individualism. It was Kozol’s unflinchingly vivid portraits of the day-to-day experiences of black and Latino children in Mott Haven that made me realize just how self-righteous and privileged I was to believe we were all on a level playing field.

We can (and should) talk all day long about employment discrimination, racial disparities in sentencing, redlining, disproportionate healthcare, voter suppression, segregation in public schools, the prison-industrial complex, and more.

But by solely discussing racism in such aggregate and abstract terms, I worry that we will lose sight of the real reason all of this matters. Racism is a problem not merely because it represents some abstract sense of societal injustice. It’s a problem because of the hurt, pain, anger, and suffering it causes to individual human beings.

If we want to mobilize people to take action against racism, facts and statistics are not enough. We need to put a human face on these issues.

As they, read the whole damn thing.

(Oh, and congrats to Latoya Peterson, new editor of Racialicious! Check out this open thread for some examples of what Peterson has planned for the future, and to put your two cents in, too.)

Related: Terrence McNally talks to clinical psychologist Drew Westen, author of The Political Brain: The Role of Emotion in Deciding the Fate of the Nation, on how progressives need to appeal to the emotions of voters to be successful in political endeavours. Also check out this in-depth three part series by Sara Robinson, who contends that, by studying, emulating and appropriating the strategy and tactics of movement conservatism, USian progressives might possibly regain control of the national discourse from the right.